On Tuesday 7th June 2022 we were treated to a Film and TV workshop. Everybody had loads of fun whilst also learning many skills in the industry of acting for film. The workshop included students from Years 7, 8 & 9 and was run by a Film Director called Sophie from MN Academy who are based in central London. MN Academy teaches children how to be in front of the camera as well as the operations required behind camera and their talent is showcased in the form of short films made by the company. Sophie was very experienced and taught us how to perform to the camera in a believable way through the use of a script where two characters discussed a bank robbery in a cafe. We also explored how to ‘ad lib’ or “riff” our lines in order to help with character relationships and believability as well as how to perform as an “Extra” in order to make the scene appear real. All of the participants left having enjoyed themselves. I would like to thank Mrs Callender and Sophie from MN Academy for the exciting opportunity to participate. 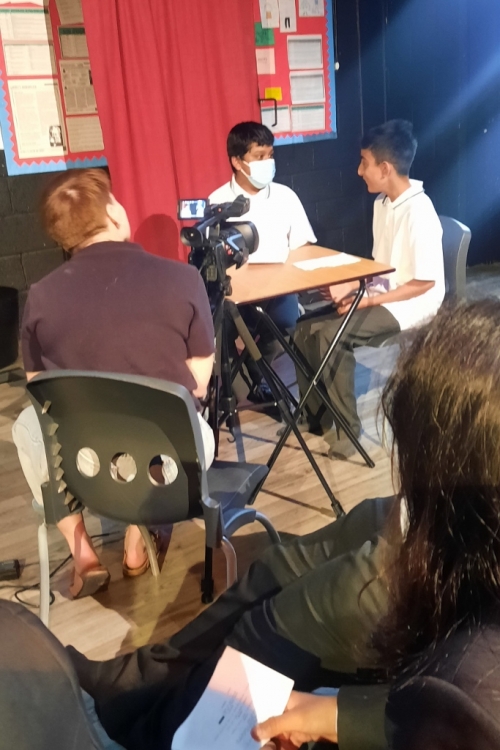 Over time, the main forms of media people consume have evolved. Nowadays people opt for TV Shows or Movies – where every frame is puppeteered by the Director to rot in a DVD or Blu-Ray over years and decades. They mostly consist of a naturalistic style, where everything is meant to be a mirror to reality. In many ways, movies are a lot easier to create than plays or pieces of theatre as they do not pose the challenge of the audience being able to see everything on “screen” and they do seem to have more visually appealing elements, but after a while, these engineered perfections can get quite boring.

That’s where Frantic Assembly comes in.

Frantic Assembly (Frantic for short) is a UK-based theatre company that specializes in Physical Theatre. They have done a variety of different shows acrosss the UK, one of those being The Curious Incident of The Dog In The Night-Time, a play that close to 100 pupils across Year 7 and 8 went to go attend in June 2022. “The Frantic Method” differs from the traditional Stalinist director-actor dynamic and instead utilizes the creation of particular sequences or scenes to be done as an ensemble effort, with everyone having a role in the development. Year 10 GCSE Drama Students and next year’s Year 9 GCSE Drama Students experienced this first hand when a practitioner from Frantic, Michelle Edwards, came in to conduct a 4 – hour long workshop.

Michelle wasted no time getting us up on our feet and had us do a thorough warm-up to both get our muscles working and get us out of our heads and allow us to be freer. We paired up and got started with a sort of trust-building exercise where our partner would lead us around the room with their hand whilst we were blind - this introduced us to one of the key principles: Consistency of pressure. We did not waste much time at all and got onto some lifts where we applied the first principle along with the second – Give all your weight. It took some time for most people to allow themselves to do this but once they did things got rolling very quickly. We learned many different lifts such as pocket lifts, clamp lifts, wrap lifts, and even had a go at making our own. If you take a glance at the Herschel Twitter, you will see me (a 6 foot 2 individual) being spun around like a lightsaber during a lift specially designed for tall people. The energy in the room was non-stop, everyone was having fun and was focused on the task. I imagine this must’ve been a nice experience for the Year 9s as this was their first taste of what GCSE Drama had to offer and a nice change of pace from their Core Drama lessons, where lots of people don’t particularly want to be there. People who did want to be there, however, certainly were Ms Wood and Mrs Forrest-Smith.

We combined natural movement with lifts in with these things called “Squeeze Duets”. This is where it was all coming together, this Is what Frantic Assembly was all about – combining basic movement ideas and developing them to make something much more meaningful. We choreographed these pieces and then chose moments or movements that naturally exuded meaning and developed them to change the focus – creating raw, visceral emotion with nothing but ourselves and music. The whole workshop really opened my eyes to forms of devising drama and gave me a lot of ideas to include in my final GCSE component 1 performance (which will be performed at the end of June). In our performances, we only have about 15 minutes of time to work with, and to develop character and emotion purely through dialogue as you see in Movies and Television is boring and ineffective. I think the ideas behind squeeze duets and lifts could be used a lot more instead of showing abstract emotions and such. Transitioning is also something I think Frantic Assembly could help with as (in the words of both Michelle and Mrs. Callender) “Blackouts, chair shuffling is boring!!!”.

All in all, it was a very positive experience. If anyone ever has a chance to go watch a Frantic show I would highly recommend it as I have been and it was BRILLIANT.  The workshop has certainly taught me valuable lessons as well as provided me with a very enjoyable experience as it has for everyone else. Thanks!

Year 7 have had a great day making minivans with @LearningtoWork !

Massive well done to Mrinmoyee for being the overall winner of the Great Big Dance Off solo competition! @tgbdo

Congratulations to our #BioBakes winners, who have won us a mixer! @ThePhySoc

Around 1000 pupils did a brilliant job of the Twelve Days of Christmas! #5goldrings

Talent Show was brilliant! Well done to all the acts!