It’s all in the genes!

On Friday 6th December, a group of A-Level Biologists were selected to visit the Royal Institute in London to take part in a genetics workshop. During the six-hour workshop, we were given the opportunity to learn about core experimental techniques and skills, such as setting and using a micropipette and operating table-top centrifuges, and applying these new skills to learn more about our own DNA.

The aim for the day was to investigate whether or not we had a particular gene needed to taste the chemical phenylthiocarbamide (PCT). During the initial phenotype test, the strongest taste I could identify with was merely paper; however, I was told by those who tasted PCT that it was very sharp and bitter.

Found in leafy green vegetables, to taste or not to taste PCT are both evolutionary traits which have benefitted the human population. For tasters, it was a signal to indicate that the substance on their tongue was probably toxic and should not be ingested, and for non-tasters it was an added benefit to not be hindered by the bitter taste when attempting to eat something nutritious to help growth. By the end of the experiment we found out whether we were homozygous or heterozygous tasters of PCT or non PCT tasters.

We found the workshop particularly useful as it correlates to an integral chapter in the A Level Biology course. We also learnt about important techniques used to study genes such as gel electrophoresis, which we will study later on in the year.

The skills we learnt on this trip will definitely be of good use and would undoubtedly help us further on in the year and also at university. 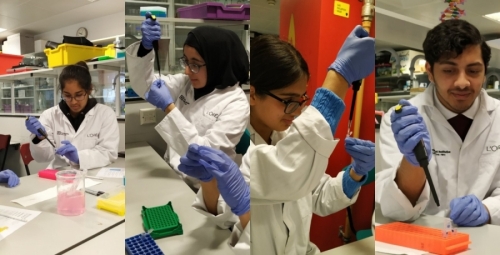